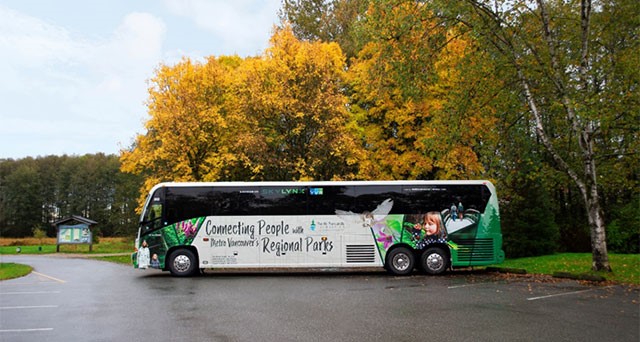 Thousands of students, seniors and people with financial barriers have been able to visit Metro Vancouver’s regional parks, thanks to the Pacific Parklands Foundation’s (PPF) Bus Grant Program.

The program, which began as a pilot in the spring of 2017 with an allocation of $10,000 from the PPF, has continued to grow each year with increasing demand from groups throughout Metro Vancouver. The PPF, with their partners at Vancouver International Airport (YVR), have since developed a grant program to connect groups to Metro Vancouver’s regional parks. A unique multi-year partnership has been established with YVR and Universal Coach Line and the PPF has received financial gifts from other donors to leverage ongoing funding.

Thanks to these donations, the dream of a chartered bus has become a reality for many groups. Since its inception, the bus grant program has provided $40,315 in funding for 78 groups and has resulted in 4,779 visits to Metro Vancouver’s regional parks by school children, new immigrants and others.

The Pacific Parklands Foundation is a registered charity dedicated to the conservation and enhancement of Metro Vancouver’s regional parks. The foundation was established in 2000 and operates with the mandate to support Metro Vancouver Regional Parks. Since 2001, Metro Vancouver has provided an annual contribution to PPF to cover core operating expenses.

For more information on the PPF and its Bus Grant Program, check out www.pacificparklands.com