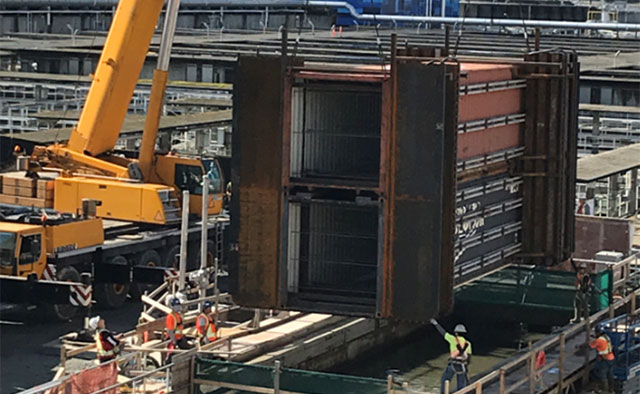 Construction has been underway for over two years on the first of two phases of the project, which will allow the plant to accommodate another 250,000 people when it’s completed in 2026.

Part of the first phase of expansion includes adding five new primary sedimentation tanks, which will increase the primary treatment capacity by nearly one-third. The majority of the new infrastructure has been built, and the first major construction tie-in between the existing primary effluent channel and the new primary effluent conduit has been successfully completed.

To facilitate this complex tie-in, the contractor built an innovative flume structure out of two stacked shipping containers welded together and, using two mobile cranes, lowered the structure into the live channel. The channel flow was redirected through the open containers, creating a dry environment between the primary effluent channel wall and the exterior wall of the shipping container structure.

This allowed the construction crew to work safely in a dry environment to cut through the concrete wall and connect the new conduit to the existing effluent channel. Plant operations were unaffected throughout the work.

The new primary treatment area is expected to be commissioned in the third quarter of 2020.

Next article Move aside Rudolph: A new Christmas single is coming to town