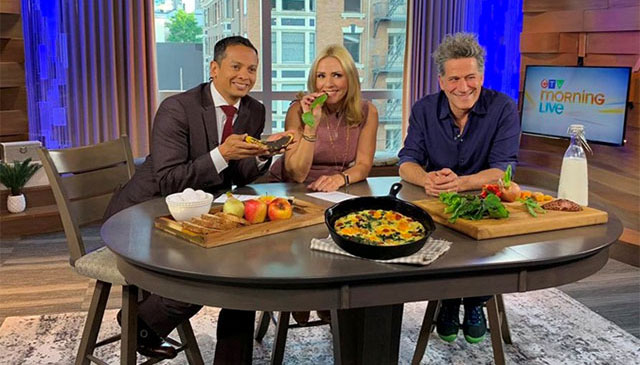 Love Food Hate Waste Canada – a consumer awareness campaign delivered by the National Zero Waste Council in collaboration with nine founding campaign partners including Metro Vancouver – partnered this spring with renowned celebrity chef Bob Blumer to get people to rethink their relationship around food through a “Plan It. Use It. Eat It.” campaign.
Household food waste is a significant issue across the country. The Council’s 2017 Benchmark Study confirmed that over 60 percent of the food Canadians throw away could have been eaten, costing the average household more than $1,100 per year. For Canada as a whole, this amounts to 2.2 million tonnes of edible food thrown out each year, at a cost of $17 billion to consumers.
Blumer appeared on the Marilyn Dennis Show, Global, CTV and CBC. In Toronto, he participated in outreach events organized by the City of Toronto at the St. Lawrence Market, and at Metro Vancouver’s outreach event at the Riley Park Saturday market on June 1, alongside George Heyman, BC Minister of Environment and Climate Change Strategy.
New meal planning tools, recipes and videos that were created for the “Plan It. Use It. Eat It.” campaign can be found online at www.lovefoodhatewaste.ca. Or follow via social media for great tips, strategies and more: Facebook, Instagram, and Twitter.

Previous articleA Future Without Waste: Mobilizing for success in the Circular EconomyNext article Check it Out!